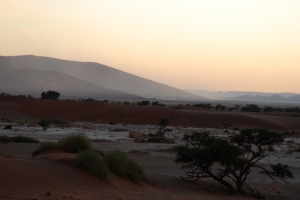 Based on my experience photographing sand dunes in Death Valley, California, one of the best times to take pictures is at sunrise. (And I shouldn’t forget to add it is also the coolest time of day too.) After the long journey the day before, getting up at 4:30 was no picnic. Speaking of which, the lodge had packed one for us intrepid folk who insist on gobbling up nature at the light of dawn. It was still dark, our driver advised us to put on coats as it would be cold in the open jeep for the 35 minutes or so it would take to get from the lodge to Sossusvlei itself. While others were sleeping, I kept an eye out for that moment before the sun rises that marks the first dawn in order to take pictures, even if it meant a slow shutter speed and a bumpy ride.
I had never seen such large dunes before: in the blue dawn light, their size and redness were very impressive. Standing like silent sentinels, it was impossible not to be awed by nature’s majesty. Although I was able to take sharp, movement-free images later, I think that some of these early dawn shots are more expressive.